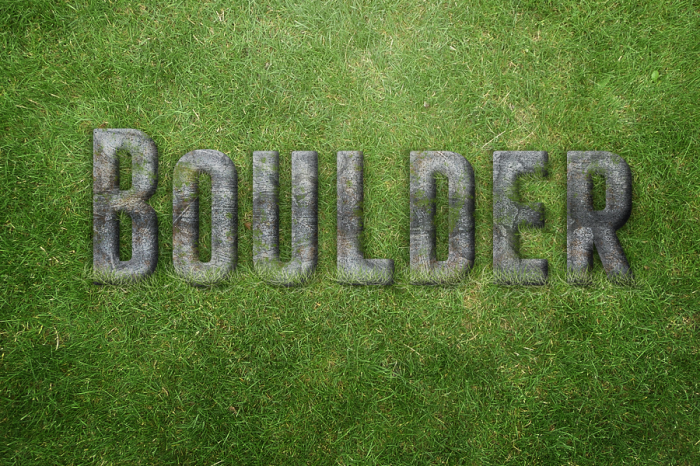 Whenever you have to get across a statement that’s concomitant with nature or the environment you can utilize stock photos of flora to make the outlook of the idea more pleasant. Follow the steps of this tutorial to create a nature themed typography.

The Layer Masks, the Gradient Tools, the Brushes, the Type Tool and other features of Pixelmator are used in this tutorial.

Open Pixelmator and create a new document. The image size used in this tutorial is 900×600 pixels. Copy and paste the picture of the grass. Then make the leaves of the grass more distinct. To do that go to Filter>Sharpen>Sharpen, set Sharpness to 30% and click OK. Then, open the Shadow and Highlights dialog (Image>Shadow and Highlights), set the Lighten Shadows to 30%, Darken Highlights to 40% and click OK. The end result should look similar to the image below. 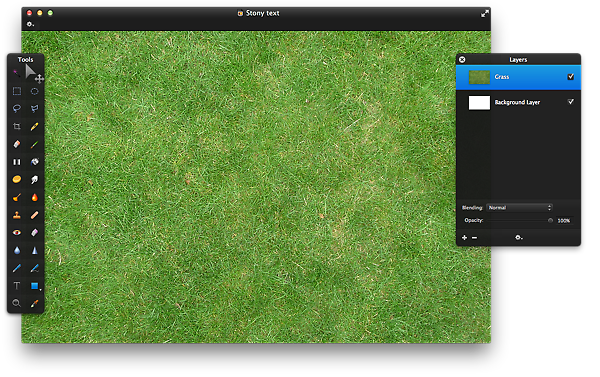 Now use the Type Tool (T) to insert the text of your preference. The word Boulder is used in this tutorial. Use Franchise as the font, 288 px as the font size and black as the color. After that, right-click the text layer and choose Convert into Pixels. This will rasterize the layer making it easier to edit. 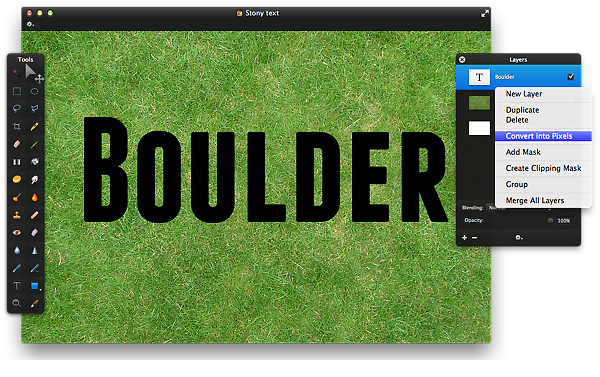 Next, lets add some lighting effects. Duplicate the layer Boulder and rename it to Shadow. Then, position it below the original layer in the Layers Palette. Go to Filter>Blur>Motion, set the angle to -30°, radius to 10 px and click OK. After that, set the layer’s Opacity to 80%. This will generate a shadow effect and help the text to blend into the image more smoothly. 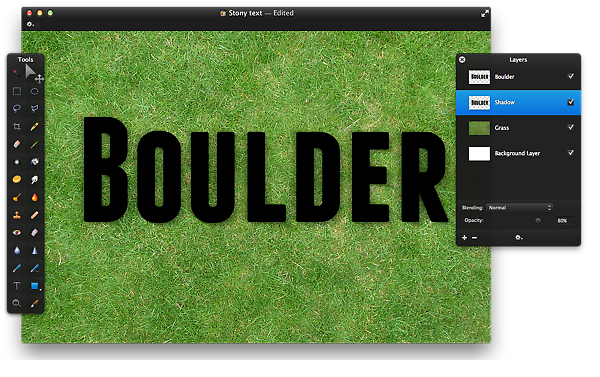 Now comes the interesting bit! Copy and paste the metal texture into a new layer. To enhance the details of the image go to Filter>Sharpen>Sharpen and set the Sharpness to 100 px. Then, right-click the layer and choose Create Clipping mask. 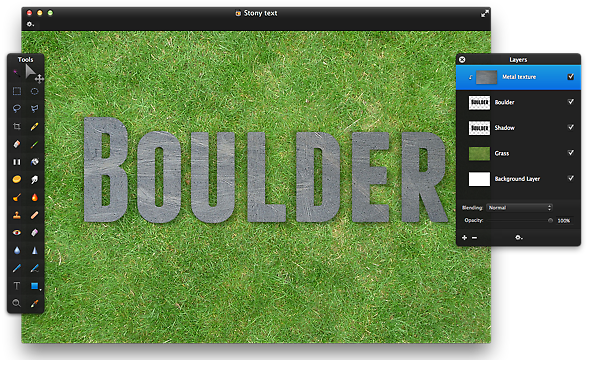 The text still does not resemble a rock. To make it more realistic, copy and paste the image of the cracked earth. Then go to Image>Desaturate. This will make the image black and white so that the colors are more similar to the colors of a stone. Next, make the cracks and chips more noticeable. To do that go to Filter>Sharpen>Sharpen, set the sharpness to 70 px and click OK. Then right click the Cracked earth layer and choose Create Clipping Mask. After that, set the layer’s Blending to Pin Light and reduce the Opacity to 30%. 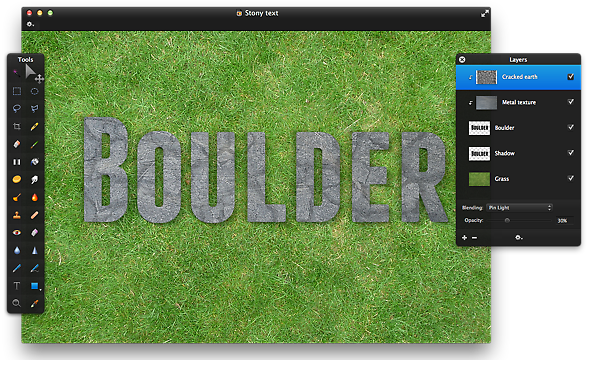 Now let’s make the middle part of the text appear indented. Create a new layer and name it Gradient. Right-click it and choose Create Clipping Mask in the drop-down menu. Then use the Gradient Tool to fill the layer with a white to black to white gradient. Use the image below as a reference and take a look at the tip below if you have trouble creating an appropriate gradient. After that, set the layer’s Blending to Overlay and reduce it’s Opacity to 40%. 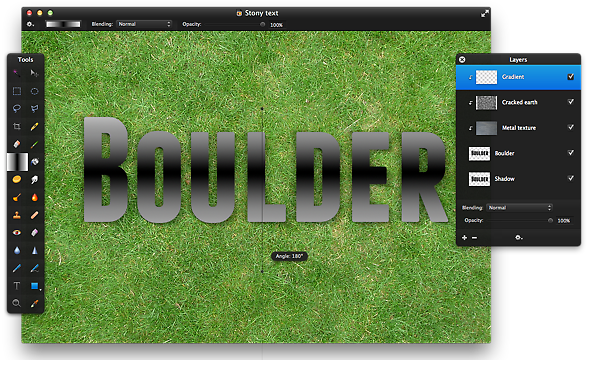 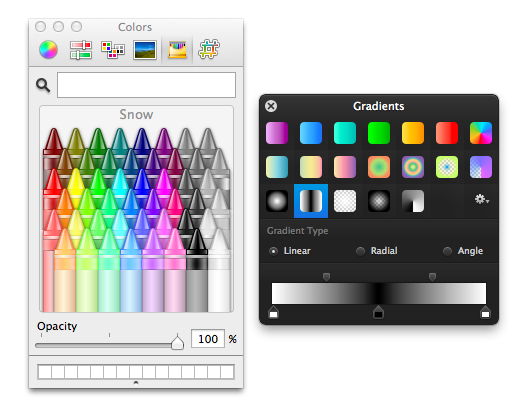 To increase the depth of the image let’s add an emboss effect. First, select the layer Boulder in the Layers Palette. Then, use the Magic Wand Tool (W) to select the outer part of the text. Use the image below as a reference. After that, create a new layer, name it White and use the Paint Bucket Tool (N) to fill the selection with white color. 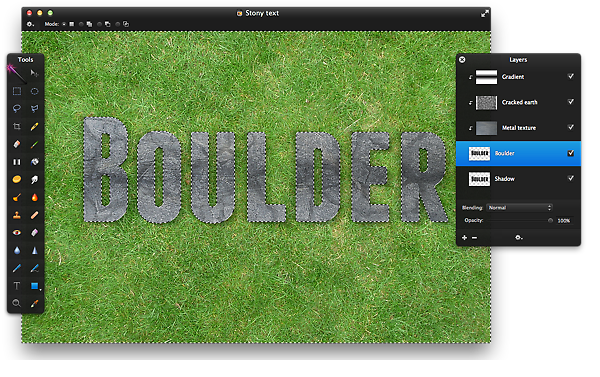 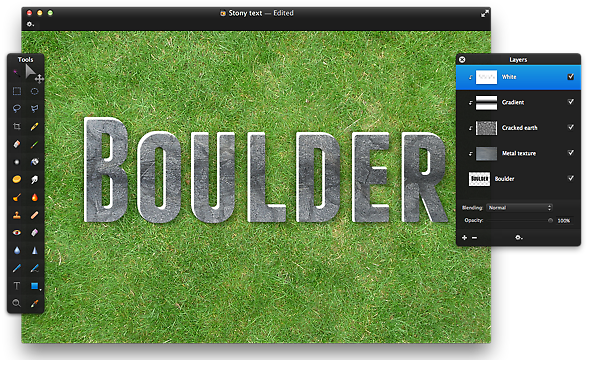 Now, select the original layer White, go to Filter>Blur>Box, set the radius to 10 px. Change it’s Blending to Overlay and reduce the Opacity to 30%. Then, change the second layer’s (White copy) Opacity to 10%. Do not use the blur filter on the second layer. 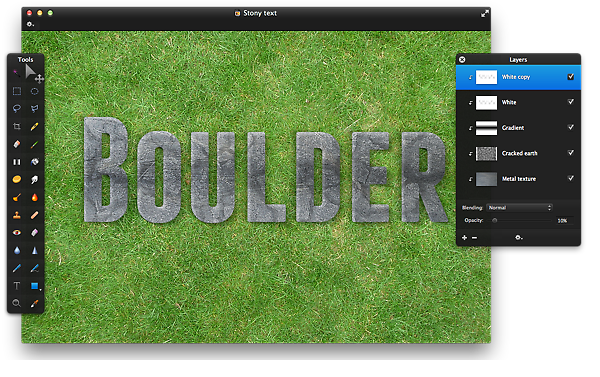 Repeat steps 7 to 8, only this time fill the selection with a black color and move it to the left and to the top instead of to the right and to the bottom. Also, blur the original Black layer and set it’s opacity to 60% and do not blur the copy layer, but reduce it’s Opacity to 10%. The end result should look similar to the image below. 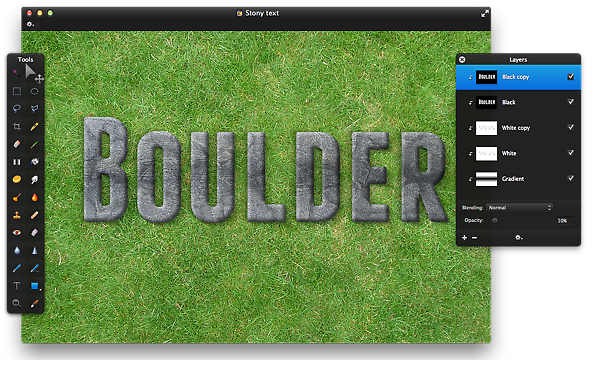 Now it’s time to add the last lighting effect. Once again select the layer Boulder in the Layers Palette and use the Magic Wand Tool (W), but this time only select the space that is occupied by the text. Go to Edit>Refine Selection, set the Smooth to 10%, Feather to 20%, size to -10 px and click OK. Then create a new layer Gloss and use the Paint Bucket Tool (N) to fill the selection with white color. The result should look similar to the image below. After that, set the new layer’s Blending to Overlay and reduce it’s Opacity to 50%. 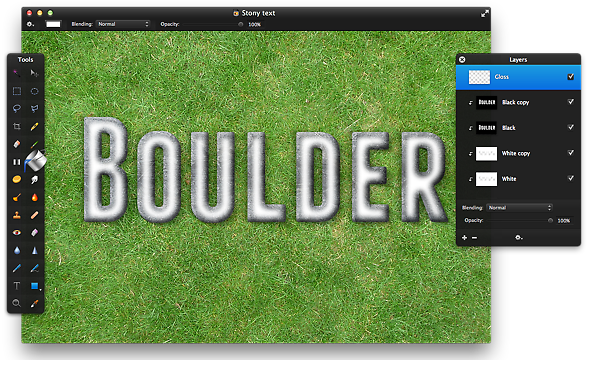 The result looks fine already but some additional details will make it even more realistic. First, let’s add some green moss to the composition. Create a new layer named Green moss, right-click it and choose Create Clipping mask. Then select the Brush Tool (B) in the Tools Palette and go to View>Show Brush to open the Brush Palette. Click the Action button in the palette and choose Grunge in the drop-down menu. Select the brush that is situated second from the left on the first row and set the color of the brush to green (color code – #52780f). Then add patches of green to the text. Use the image below as a reference. 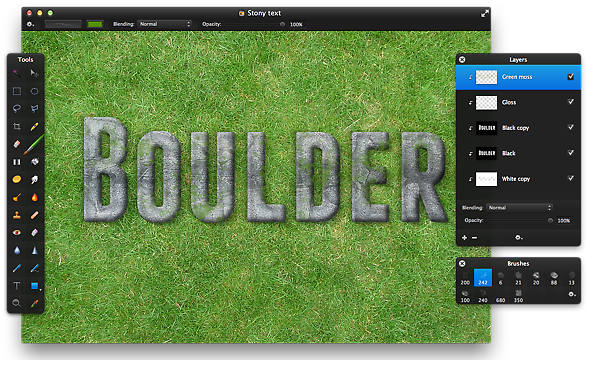 To smear some dirt on the letters create a new layer named Dirt and repeat step 12, but this time use brown as the brush color (color code – #804000). After that, set the layer’s Blending to Overlay and reduce the Opacity to 50%. The end result should look similar to the image below. 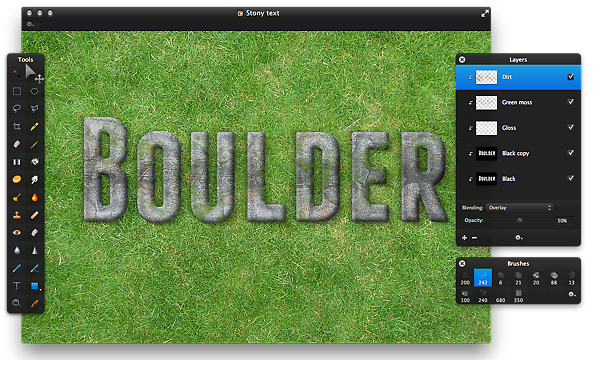 Lastly, let’s cover some parts of the text with grass. Once again select the Brush Tool (B) in the Tools Palette and open the Brushes Palette. Click the Action button and this time choose Nature in the drop-down menu. Then, select the brush that’s situated second from the right in the middle row, set it’s size to 40 px and the color to dark green (color code – #52780f). Now, cover the lower part of the text with leaves of grass. Use the image below as an example. After that, sharpen the grass blades to make them appear more defined. Go to Filter>Sharpen>Sharpen and set the Sharpness to 50% and click OK.

Then, create a new layer named Light grass and repeat the same actions, but this time use light green as the brush color (color code – #b6cf8d). After sharpening the new layer, set it’s Opacity to 70%. 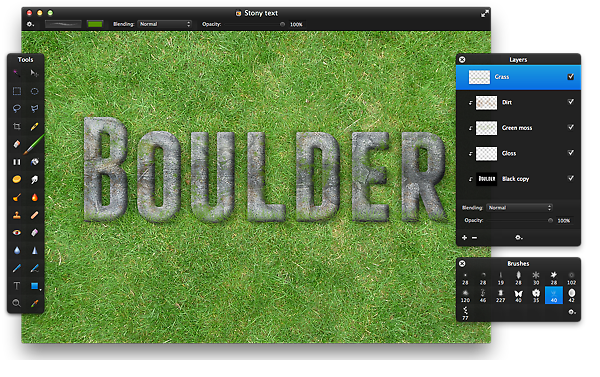 Now repeat the actions from step 14, only this time cover the top inner parts of the letters. Use the same brush as before, but set it’s size to 20 px and do not forget to add a sharpen filter to both new layers. Also, reduce the opacities of both layers to 80%. The end result should look similar to the example below. 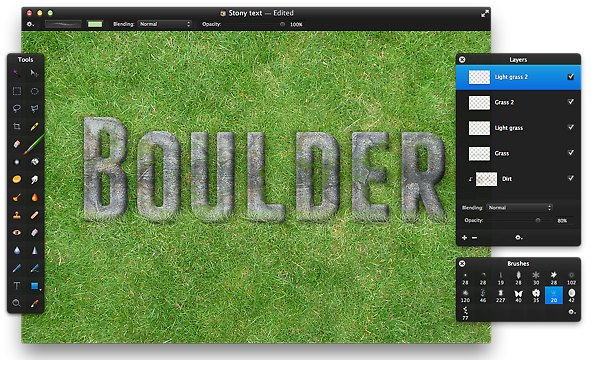 Lastly, let’s intensify the colors of the image so that the final result looks more defined. To do that create a new layer and name it Gradient. Use the Gradient Tool (G) and fill the new layer with a white to black radial gradient as it is shown in the example below. Then, set the Gradient layer’s Blending to Soft Light and reduce it’s Opacity to 70%. 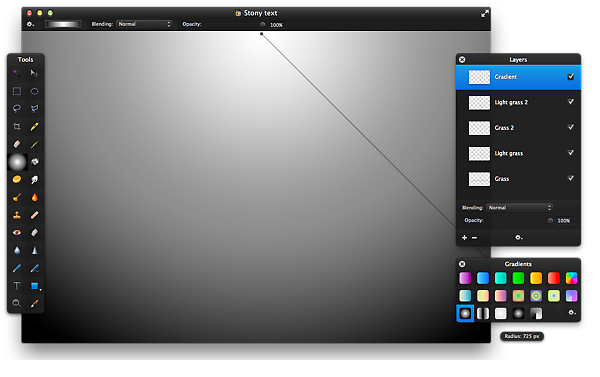 Have fun creating fascinating typography with the help of stock photos. Remember to choose high quality works and be sure to properly incorporate the text into the image. 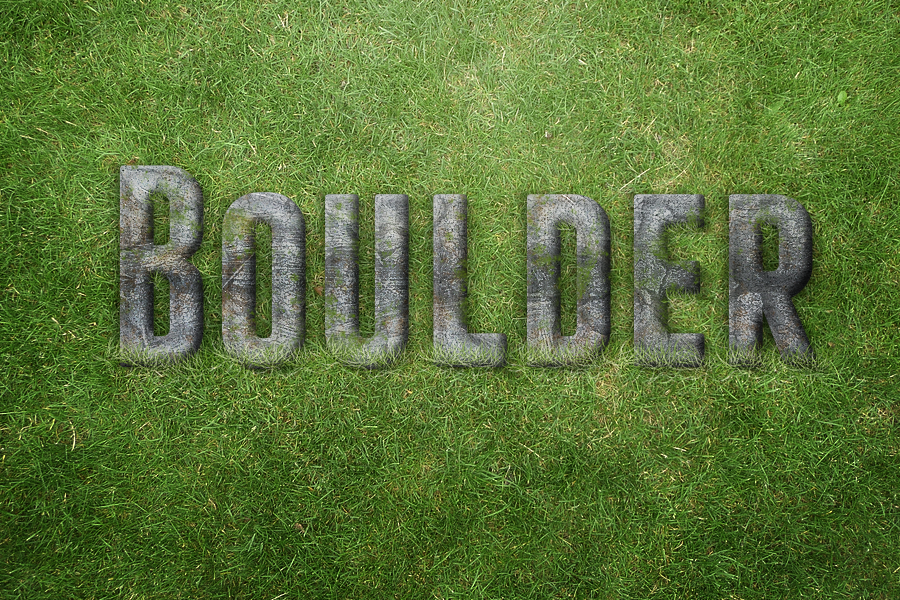